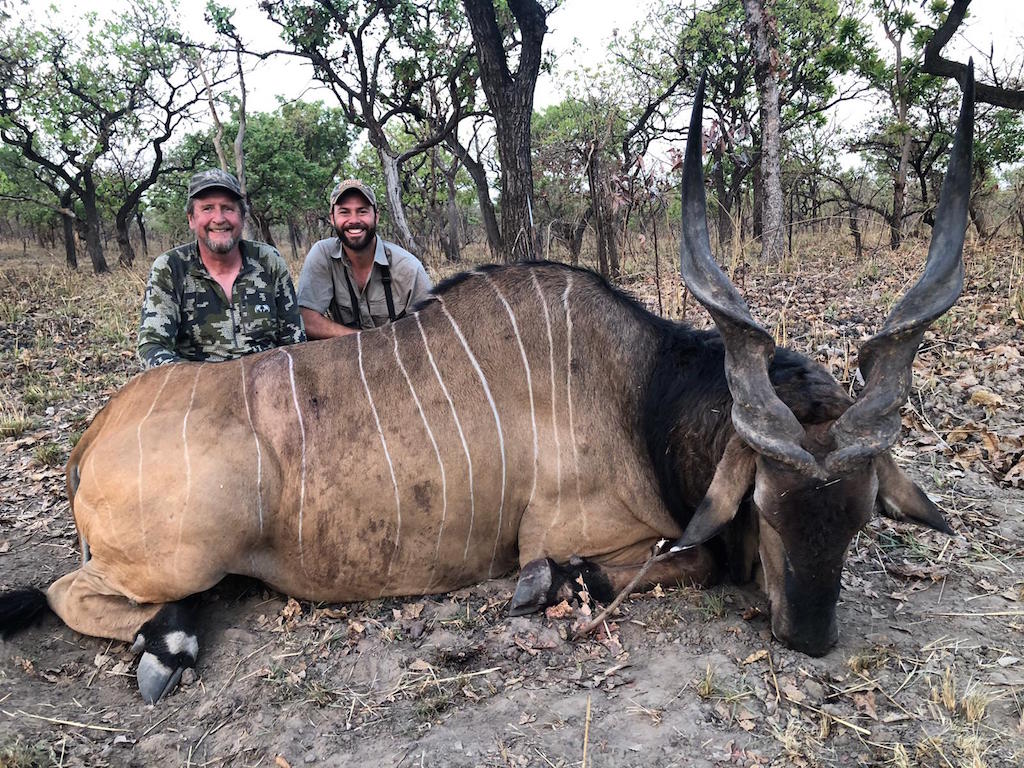 Tim and Luis pose next to a wonderful Lord Derby trophy.

I met Tim the first time I hosted the SCI Convention in Las Vegas, around 2017. By that time, he had already met my partner Pedro in a previous show and they had already discussed about an once-in-a-lifetime hunt that, in Tim’s opinion, was the Lord Derby hunt. He had been dreaming for years about this hunt and he was just looking for the right partner to make it happen. On its side, Spainsafaris had a long experience guiding hunts in Cameroon and, for some reason, what Pedro told him caught his attention and finally booked for 2020.

Because of troubles in our agendas, Pedro couldn’t finally make it and I had the opportunity to guide Tim in Cameroon. He was my fifth client in a row, as in the previous weeks I had been guiding other clients in their Lord Derby or Buffalo hunts. Thus, I had already located some good trophies and I had a very accurate idea of what we were going to offer Tim. Early on our first hunting day, we jumped in the truck, faced my trackers and said “Guys, this is my good friend Tim. He came from far away and he has been dreaming all his life about harvesting a big Lord Derby with a huge black mane, so let’s bring his dream to life!”. This is how our safari started, the rest is shown in the pictures.

So, who is Tim Reiger?

My name is Tim Reiger, married to my wife Kathy for 35 years, father of four, three girls and one son. We also have seven grandchildren. I was born and raised in Eastern Pennsylvania, USA. I’m self-employed and own a small manufacturing business here in Pennsylvania.

How and when did you start to hunt?

You have been hunting all around the globe, so what are your best memories related to hunting?

My favorite memories, well…, that’s difficult because all the hunts have different highlights. I would have to say the friendships I have made with the fantastic people I have met all over the world are my most cherished memories.

We started talking about the Lord Derby hunt many years before your trip. You said that it was a dream hunt and you didn’t want to fail. How did you get to the conclusion that Spainsafaris was your best partner to succeed?

Honestly, just talking to Pedro I sensed he is a very honest person. I also like the fact that Spain Safaris is a very personalized company. I don’t like to hunt with big companies where they just shuttle you thru as a number, not a person. Spain Safaris pays very close attention to each client to make sure their adventure is not only successful, but also enjoyable from every detail.

What was your idea of Cameroon before arriving and what did you find?

I kind of expected Yaoundé and Garoua to be a bit more modern. When I finally arrived, I found it was like going back in time 50 to 75 years ago. 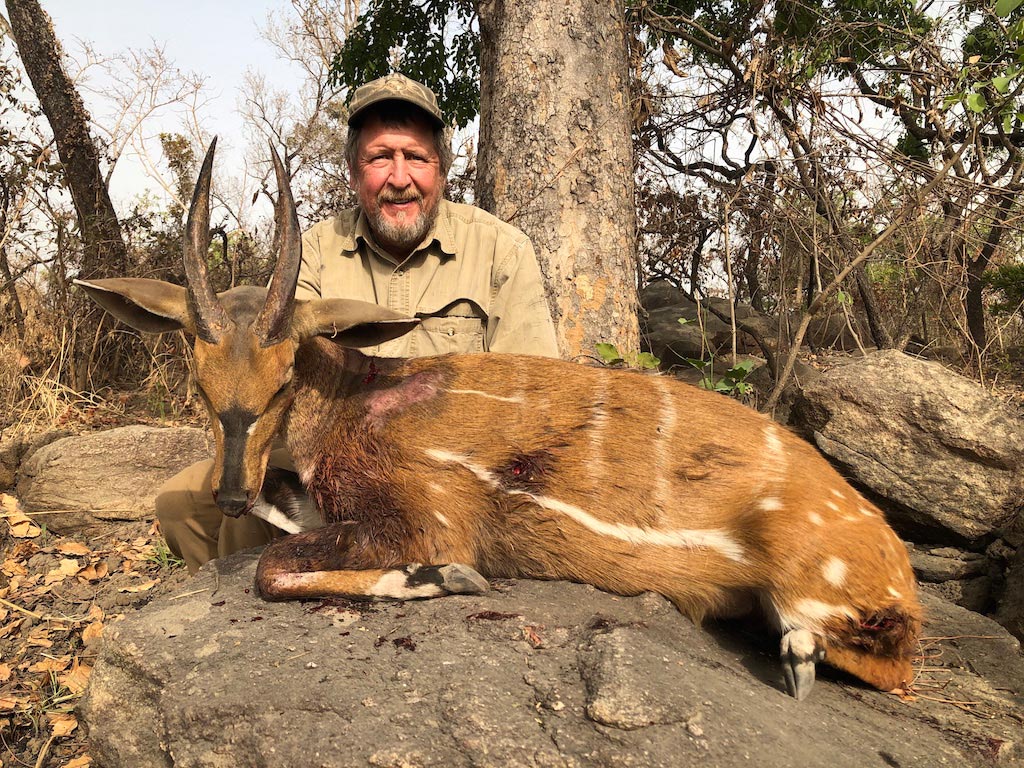 Could you describe your hunt?

Wow! I’ll try and be brief, but there is so many great things to say about the hunt. First camp is fantastic. Way better than I expected. Fantastic food and accommodations. The abundance of game is amazing. We were always seeing or tracking animals. Plenty of game, especially the Elands. Very professional guides, that knew the terrain and were able to easily communicate with the local trackers and scouts to locate the species we were looking to find. Definitely I am glad I had excellent foot wear as the walking can be difficult and sometimes many kilometers but the rewards for the effort are awesome. The biggest drawback, it’s HOT! (being from Pennsylvania, I like the cold!)

Euphoria, pure and simple. A dream come true. Something I worked hard to afford, to hunt the animal and finally harvest the Eland.

What do you value the most of this hunt?

Like I said earlier, friendships are my most cherished memories. But I still value the Eland as the trophy in this hunt.

Would you come back?

Absolutely! I want to chase Buffalo and Roan again and also do a Bongo hunt in the jungles of Cameroon. 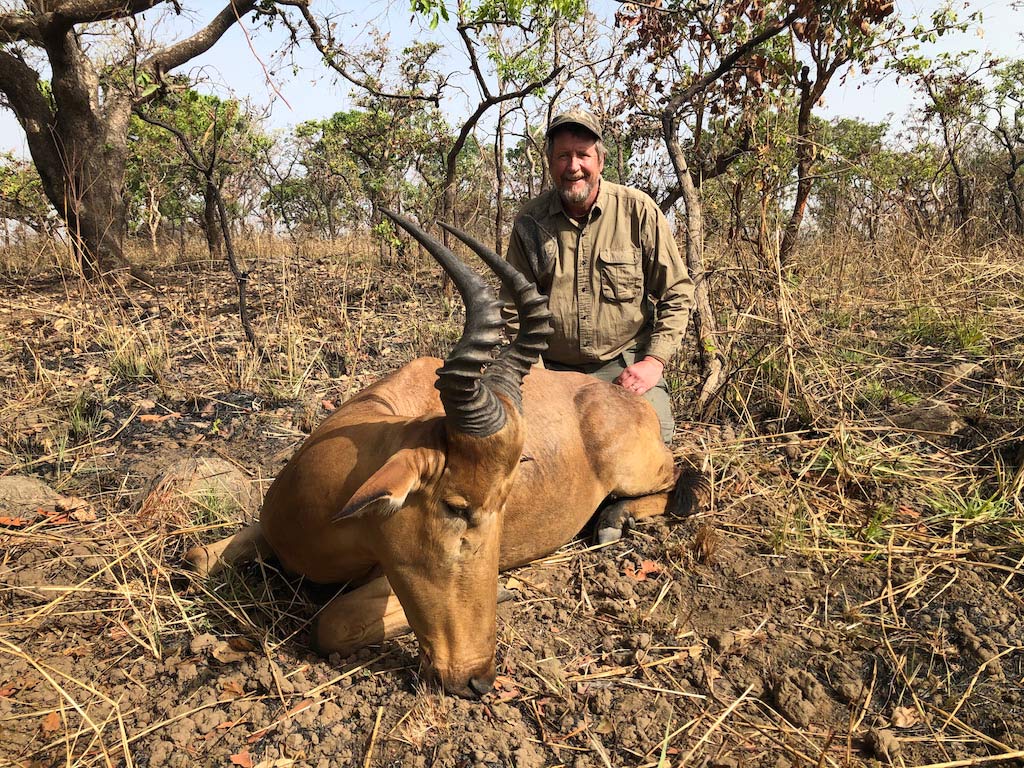 It was late February 2020 when we were hunting in Cameroon and meanwhile the pandemic progressed in Europe and in America. We were absolutely far from that reality… What did you find when you arrived at home?

Chaos, I made it home five days before the borders were closed indefinitely. Very lucky to make it home because of a virus. Then all hell broke loose and we are still dealing with forced closures and social distancing a full year later.

You have been the President of the Lehigh Valley Chapter for years, what are your duties nowadays?

I was president of the Lehigh Valley Chapter SCI for three years from 2013 to 2016. I also held Vice-president seat, treasurer, and conservation chairman seats on the board of directors. I am currently still very involved as a director. My biggest responsibility as one of the senior directors is to help the newer board members learn what Safari Club is about and train them for future responsibilities.

What is the mission of the Lehigh Valley Chapter? Why collaborating with your chapter?

The Lehigh Valley Chapter SCI has always had the mission of Hunter Advocacy thru conservation and education. We currently have an extensive veterans program, a college scholarship, support the AWLS school, and are always funding multiple conservation projects through Pennsylvania and the world. We are a very large supporter of the Pennsylvania elk herd at the KECA facility in Benezette PA, have funded legal battles in NJ over the closure of black bear hunting, supported the Guides and Outfitters Association of British Columbia, (GOABC) and the guides association in Alaska. Funded the fight to keep grizzly hunting open in BC and fight the wolf initiative in Colorado to name just a recent few. We also supported the scientific study of Leopards in Zimbabwe and helped fund the preservation of the Rhino in South Africa. Most recently we supported the “Share The Impact “ fund to assist outfitters around the world because of the virus. LVCSCI is a very active chapter and I see great things coming from this chapter in the future.

How will the Lehigh Valley Chapter be able to help when the pandemic is over?

Every year we have a huge two day fundraiser generating thousands of dollars for the support of hunting in Pennsylvania, the US and all over the world. Thru generous donations from outfitters, travel companies and individuals, we will continue to be able to support hunters, the hunting community and support wildlife conservation.

Considering that the incomes generated from hunting contribute to wildlife conservation, one year with no hunts (or a few of them) could represent a threat for outfitters and wildlife. What’s your forecast for the future?

Exciting! Because of the virus, people were not able to go anywhere. The number of licensed hunters in the US skyrocketed because everyone had spare time to try a new hobby or find more time for the sport they love. Will all of the new hunters travel internationally? I don’t think so, but some will, thus increasing travel when the pandemic is over. The next few years will tell the tale of success for outfitters and wildlife. 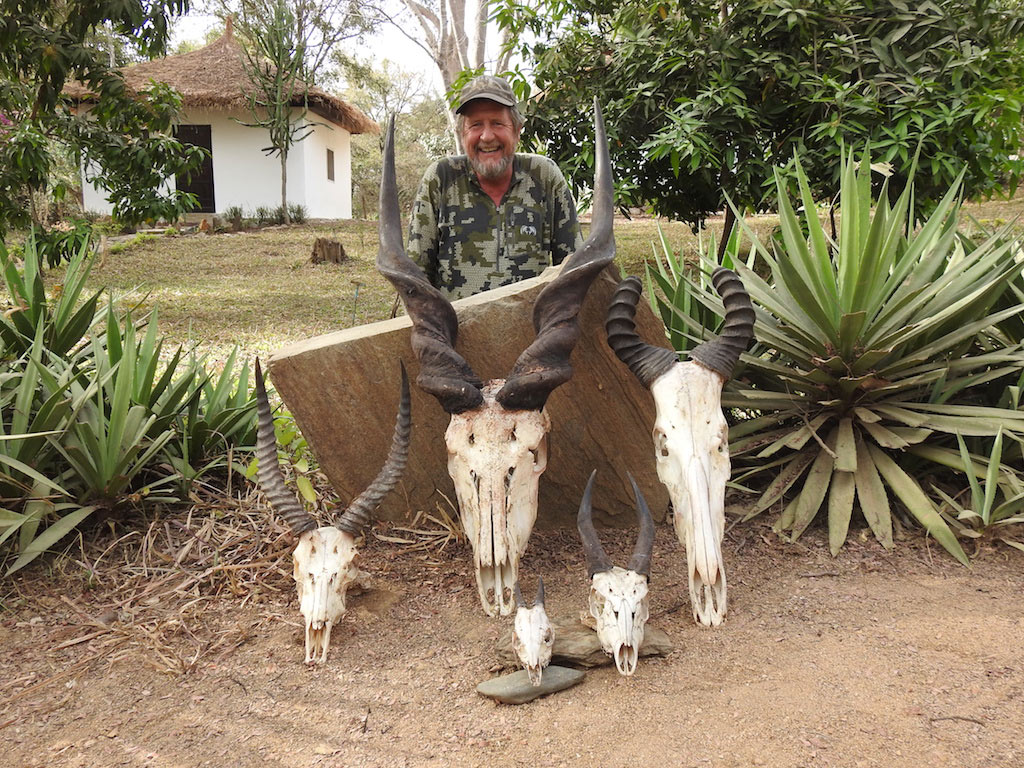 12 days after Tim started his safari in Cameroon, he collected numerous trophies such as the Lord Derby, the Harnessed Bushbuck, the Western Hartebeest, the Western Cob and the Red Duiker.

Luis Berga is Marketing Manager and hunting guide at Spainsafaris.

What you can read next 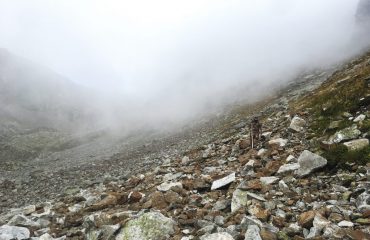